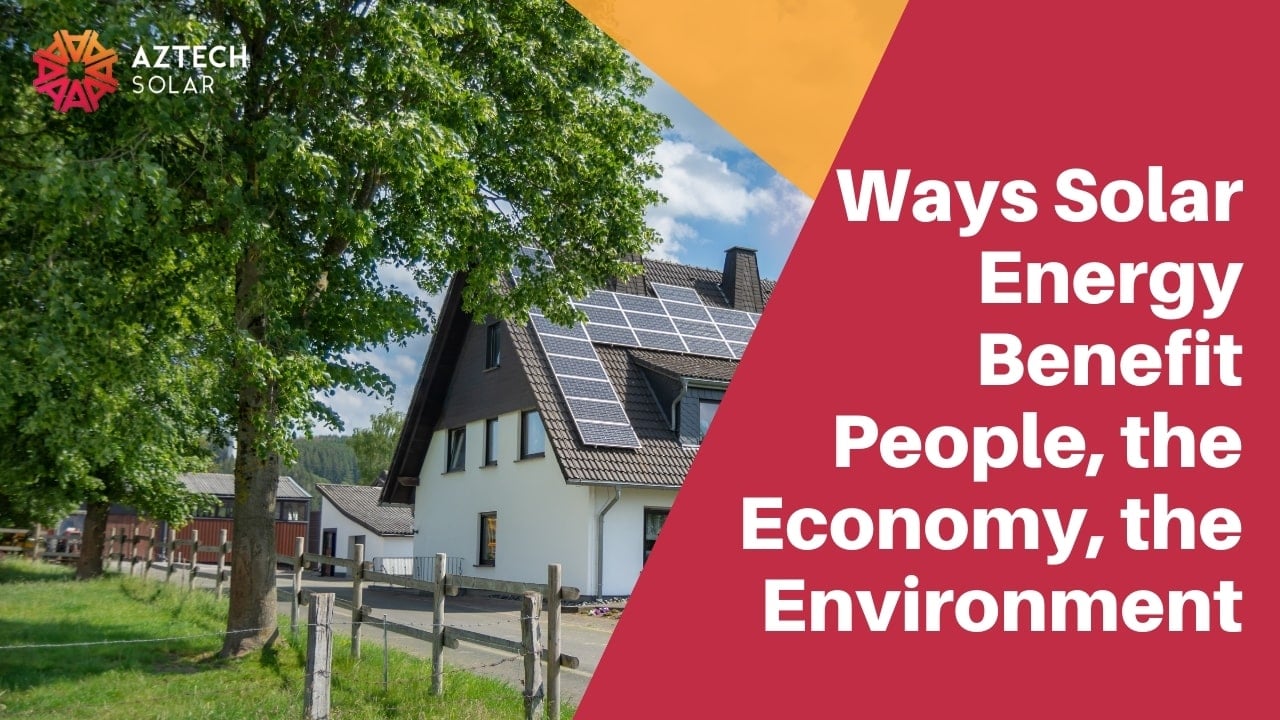 Australia is home to the worlds’ best conditions for producing solar energy. Research shows that solar energy should and could be the country’s major source of energy in the coming years, if more people make the switch. The amount of solar energy produced in Australia caters for about 7.5% of the country’s general energy needs, with small scale solar up 25%. The use of solar energy has grown hugely in the last 5 years and is beginning to cut down fossil fuel greenhouse gas emissions.

Experts explain that solar energy has minimal impact on human health and the environmental benefits hugely outweigh those of fossil fuels. Over the years, there has been a growing demand for better energy solutions as our understanding of the global environmental disaster has developed. Due to ongoing technological advancements, solar energy could become the most cost-effective form of energy available in Australia and offer the following benefits:

Unlike traditional sources of energy, installation and use of solar energy are cleaner than coal or gas, healthier and also renewable. Whenever you install a solar unit in your home, you reduce your carbon footprint by a large scale. The surrounding environment is free from greenhouse gas emissions.

Water is of course one of the most precious natural resource on earth, and Australia periodically runs the risk of droughts due to its generally arid weather conditions, so it is no coincidence that traditional means of electricity production are non-preferred, because they consume more water than solar.

Power generation through solar panels is by far the most water friendly at 110 millilitres per kilowatt hour (water is used primarily for cleaning solar panels).

Our wellness and health can be affected by the air we breathe. Generation of electricity from fossil fuels emits carbon dioxide which compromises air quality and may be hazardous to our health. To a certain level, complications like asthma, bronchitis, headaches and even some cancers can be exacerbated by air pollution.

The more we invest in the use of solar energy for power, the less we will have to deal with emissions from fossil fuels. Electricity from solar panels is not toxic, and therefore homes and businesses should rely on solar power for their daily energy needs.

Release of toxic fumes into the atmosphere like carbon dioxide and nitrous oxide, contribute to air pollution and The Greenhouse Effect (The process whereby the earth is warmed due the insulation of heat from certain atmospheric gases). To an extent, The Greenhouse Effect is natural, but human activities like burning fossil fuels, have spiked the amounts of greenhouse gases emitted to our atmosphere.

In order for us all to help combat the environmental effects of fossil fuels, Aztech Solar strongly advises the installation and use of solar energy wherever possible in Australia and to take advantage of that beautiful sunshine that we all adore.

Sunshine is free and plentiful in Australia, compared to fossil fuels which are finite and quickly running out. It is vital to control our reliance on these increasingly scarce resources, partly by taking advantage of the free abundance of the sun and begin to guarantee a stable energy future.

Australia hugely benefits from the use of solar energy systems. Acquiring solar panels from Aztech Solar can help you in the following economic ways:

Solar panels help save Australian citizens a lot of money because (aside from set up and maintenance costs) the energy obtained from them is free, reducing overall energy costs.

Solar panels are also becoming more affordable due to market demands and government schemes to help with costs of setup.

The modular nature of solar photovoltaic (PV) systems allows them to be strategically placed right next nearer to where they get used, making them even more cost-effective.

Solar panels can affect the redirection of network infrastructure. People and industries are moving towards the source of the known solar regions.

Upwards of 2 million (21%) of Australians use small scale solar, which is due to grow year on year in the future. There is a great opportunity for businesses and end-users alike in solar.

Benefits of Solar Energy for us all

Solar panels require very little maintenance because they have no moving parts. In recent years, some manufacturers advised regular cleaning of solar panels to remove dust, but this is usually done by rainfall and wind and can be done as little as once every 6 months according to some solar panel cleaning companies.

11. Create your own energy at home

After purchasing your very own solar system, you will be creating more of your own electricity from home and reducing your reliance on the power grid which allows you reduce your power bills.

The availability of a solar panel tends to increase your real estate market value in the minds of home buyers, a recent survey showed.

Get Solar, Get Aztech

Solar energy is not a fad or a passing idea. Over the last 30 to 40 years Solar Energy increasingly displaced traditional sources of electricity for health, environmental and financial reasons. The advantages far outshine the disadvantages. Renewable solar energy has had, and will continue to have, tremendous benefits to the people of Australia and many other parts of this one planet we live on. Make the change today and contact us at Aztech Solar to find out more or get a quote.