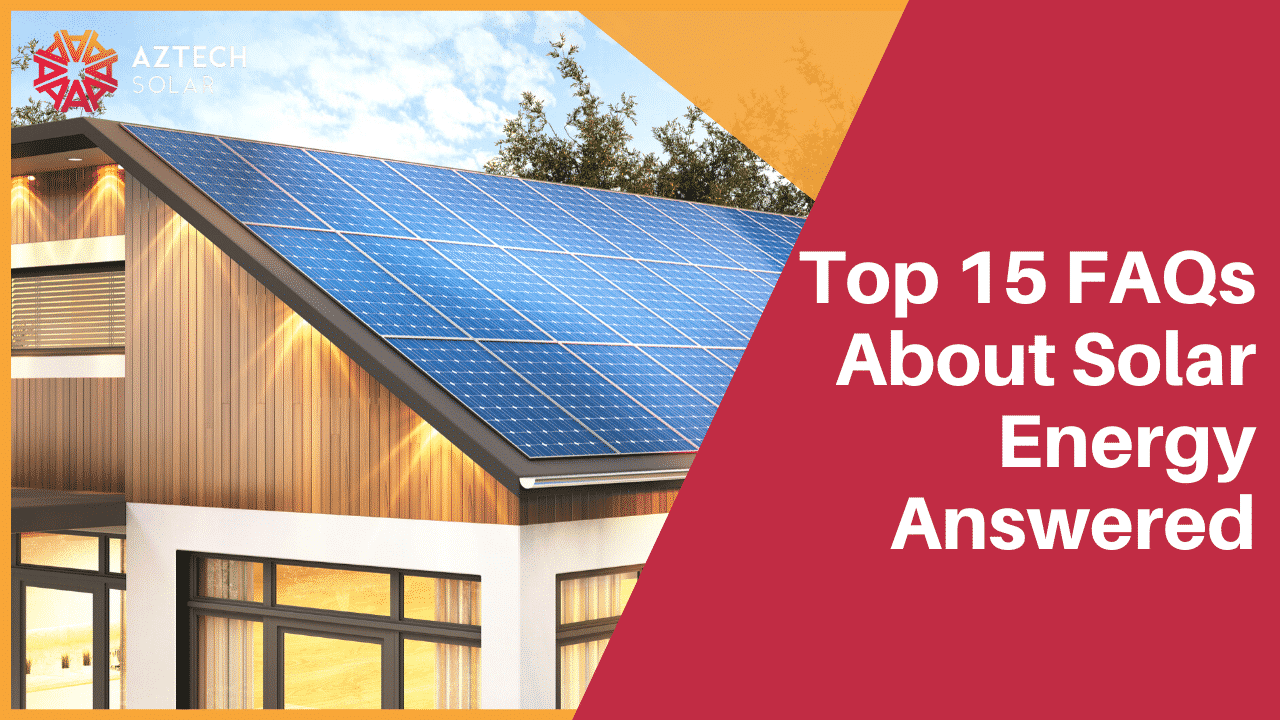 Solar energy is fast gaining mainstream acceptance as a viable source for generating power, despite the higher initial costs. In Australia, since 2018, solar installations have risen dramatically and as of June 2019, Australia ranked among the world’s top ten countries in the world for solar installation and usage. However, it remains a much-debated topic around the world, largely because there are too many aspects, technologies, components, terminologies and questions associated with it. Let us try to answer some of them.

1. What is solar energy?

Solar energy is energy produced by Suns light (photovoltaic energy) and heat (solar thermal). It is renewable and inexhaustible as it comes from the Sun and is harnessed using panels and mirrors.

2. How is solar energy obtained?

3. What are the benefits of solar energy?

Solar energy is renewable, available in abundance, and non-polluting. It has a zero cost in terms of energy-production. The only cost you incur is towards the initial installation of components needed to produce solar energy. There are no additional maintenance costs over the years which mean that your investment is recovered quickly.

Solar energy systems do not generate electricity all the time. It depends on the availability of sunlight and heat generation.

4. How does solar energy impact the environment?

Solar energy is extremely environmentally friendly. There is no noise pollution. The installation doesn’t generate any waste because there is minimal maintenance and the solar panels have a considerably longer life than other energy-producing mechanisms.

5. How much does it cost to go solar?

The cost of a solar system depends on how big or small your installation is. In other words, how many kilowatts (kW) of solar panels are used in your installation will determine its cost. As an example, a typical cost of a 3kW solar system will set you back by about $4300 after deducting the rebate of $1665 provided by the Australian government. This is just an example of the prevailing rates. It is strongly recommended that you get 2-3 quotes from the dealers in your region. For a quote from a trusted solar provider, contact Aztech Solar.

6. What are the various components used in a solar system installation?

The main components in a grid-tie system are:

In addition to this, the battery-based solar installations also need the following:

7. What is the life of an installed solar system?

Solar panel systems have a guarantee of 25 years, meaning that they have a rather long lifespan. However, there are certain components that might need replacements after a certain number of years such as inverters and batteries.

8. How big of an installation do I need?

The size of the solar system to be installed in your facility would depend on your monthly energy requirements. There are other factors that must be considered such as the amount of sunlight the area gets, shading and face of the panels.

In order to calculate the size of your solar system, take your daily kWh energy requirement and divide it by the hours your home receives peak sunlight. This will give you a kW output. Divide this kW output by the efficiency of your solar panel to arrive at the total number of solar panels you need for your system.

9. Does a solar panel generate electricity only on a sunny day and what happens when it is raining or snowing?

While there is nothing to stop you from procuring the equipment from an authorised dealer and doing the installation yourself, we strongly recommend against it. There are multiple factors that can go wrong. The solar system must be mounted correctly, and the panels must be installed at specific angles. You would also need the expertise of an electrician to join the components. All this requires skill, knowledge, and experience. Hence, it is best left to experts of the trade.

11. Will a solar power installation in my home increase its value?

Yes, a solar system installation increases the resale value for your home. Studies have shown that homes with solar systems sell about 3-5% more than the non-solar ones and also fetch a better price for their owners.

12. What are the different types of solar batteries?

There are two kinds of batteries used in the solar systems – Lead acid and Lithium ion.

Lead acid are cost effective but have a shorter life span and often require more maintenance. On the other hand, Lithium ion batteries are maintenance-free and have a longer life.

13. What is the difference between grid-tied and off-grid installations?

As the name suggests, grid-tied systems get attached to public utility grids. The grid acts as a storage system for the energy produced by the panels. You won’t need to buy batteries for the system. For this reason alone, grid-tied systems are recommended as they save a lot of money.

However, if you do not have power lines in your home, then there is no option but to use an off-grid system. In this system, the batteries store the energy produced so that it can be used in the future.

14. Is a solar system financially viable?

Also, the technology used in the manufacturing of panels and other components is improving rapidly making them more affordable and cost-effective.

15. How does a solar system reduce my power bills?

Production of clean energy from the Sun reduces costs significantly because it is an inexhaustible source of energy and does not require regular maintenance or usage costs. Consider this; in the case of power plants engaged in constant production of energy, the price of energy increases rapidly during the period of peak demand during the day. On the other hand, in solar systems, energy production reaches its maximum potential during the day and therefore meets the demand of the consumers during the peak time without any increase in the cost.

Overall, the questions raised about solar energy systems can be answered by experts in the field. Solar powered systems are the way of the future, leading Australia into a new domain of energy production. The benefits of solar energy strongly outweigh the negatives and despite the initial start-up costs, are a brilliant and cost-effective way to provide energy to you business premises or home.

For a quality quote for installation of your solar system, contact Aztech Solar. Market leaders for design and quality, they can provide outstanding service and bring your house forward into the future of solar renewable energy.