What is a Solar Power Generator? 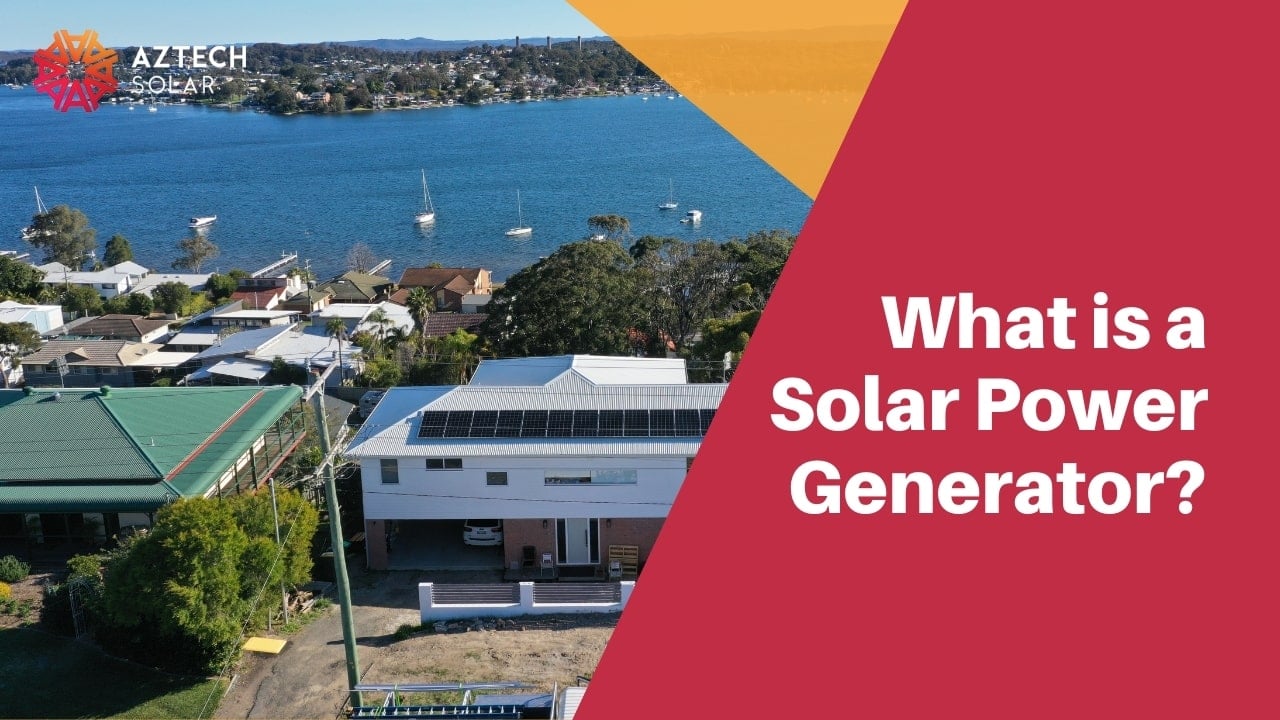 Learn about solar power generators and why it’s ideal to get one.

A solar generator is infinitely helpful to those who will experience a natural disaster such as a hurricane, storm or flooding. If you live in an area that suffers from power outages but has an abundance of sunlight, as many places in Australia do, a solar-powered generator could be ideal for you. Whether you’re planning to use it as a backup system or a primary source of energy for your caravan, here’s everything you need to know about solar-powered generators.

What are Solar Generators?

A solar generator can be purchased from an industry expert, such as Aztech Solar and is any system that provides power by harnessing it from the sun. Much like how a diesel generator works, a solar generator takes the power of the sun and stores the energy inside a battery for later use. It’s almost the same as having a solar array at home, but in a mobile form.

Even though a solar-powered generator cannot power something large like an entire home, mobile locations like caravans, RVs, boats, and those used as emergency back-ups can take advantage of these immensely functional generators.

Portable solar generators are in a similar position – whilst they can’t currently power entire properties, they do boast distinct advantages to cleanliness and carbon emissions.

What parts make up a Solar Power Generator?

Solar generators capture photons from the sun and charge a battery using a solar panel. Solar generators integrate 3 or 4 components to harness the power of the sun (depending on the type you purchase), providing much-needed power: The battery pack, an inverter, and the charge controller.

Portable solar panels also add the extra advantage if you are travelling to a remote area. Each component matches the electricity output level of the device that will be connected, either 12, 24, or 48 volts.

For batteries, most generators take advantage of lithium-ion batteries or lead-acid batteries, depending on the needs of the users. Here’s how these elements work together:

To harness solar energy, you need solar panels as an input system. Solar panels capture the energy particles and thermal heat from sunlight using photovoltaic cells. Most solar generators have one to two high-efficiency solar panels. As solar generators can’t carry an entire solar array with them, these panels need to get as much energy as possible.

The charge controller works as the central processing unit of the solar power generator. Depending on your battery type, it protects the generator by controlling how it charges and discharges. Most batteries have a certain limit to get a full charge. Overcharging it can be a danger, as it then becomes a risk towards fires or explosions. Once a battery is full, the controller will stop any energy conversion process.

The inverter is a crucial component of solar power generators. It converts the standard DC voltage that batteries produce and convert it to usable AC power. Most appliances run via AC power, so this is a valuable part of your generator, whereas DC equipment and sockets bypass the inverter.

Solar-powered generators have several advantages over diesel or gas generators. Fossil fuel options do have their pros, but a solar generator can do everything a standard generator can.

Solar Generators are cheaper to run

A traditional gas-powered generator needs petrol to run, be it gas or diesel. To be useful, you need to keep buying petrol. Once you run out, your generator is as good as useless. Having no pistons or engine parts means there are fewer parts to maintain. Lower maintenance saves you money in the long-run.

A solar generator will never run out of power, as long as there’s access to sunlight and the solar panels are working, you will always have energy that you can use.

Solar generators run on clean, renewable energy, so you don’t have to worry about the environment without fossil fuels. Once manufactured, solar generators are carbon-neutral, preventing the release of any pollutants in the atmosphere. When they produce and store energy, everything is clean with no harmful or unpleasant fumes to be inhaled.

Most solar power generators are quiet and low maintenance. They don’t use combustion to produce energy, so no explosions and no pistons moving. No moving parts means they’re great to use in caravans and RVs.

Much like any generator, a solar-powered generator will also have its disadvantages. The system is as good as it gets, but it can still have some drawbacks.

Solar generators are still quite pricey, needing a higher upfront investment than gas generators. Even then, although the lower long-term operating cost of solar-powered generators offset this upfront cost.

A solar power generator is, of course, dependent on sunlight. If it’s constantly cloudy the batteries will charge slower than expected and may only be able to power a few appliances like phones, laptops, radios and small blenders.

The draw backs, as you can see, are clearly outshone by the financial, travel and ecological benefits of a Solar Powered Generator!

Get a Solar Generator from Aztech Solar

A solar generator is a useful backup device that can help you receive cleaner energy. If you live or like living somewhere that’s a bit remote or even fully off-grid, like a camp or a caravan, this is the most cost-effective solution for you.

If you’re interested in getting a solar power generator for your home, or finding out more, then consult with some of the experts at Aztech Solar. Talk to us today and find out how we can help you find the best solar-powered generators for you.